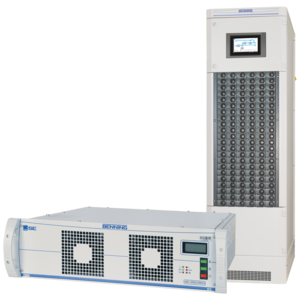 Established more than 70 years ago, today BENNING is a leading supplier of power supplies in support of the information, telecommunications and industrial technology sectors.

Additionally the weight and volume of the rectifiers and distribution units was also reduced during development leading to further practical benefits and reduced resource use.

The highly efficient and innovative SE series contributes to a reduction in electrical energy consumption lessening your environmental impact. Using less energy means there is less heat to dissipate which in turn results in a reduced need for cooling providing another consequential saving.

As an example, using the new SE series rectifier reduces the environmental impact of a DC supply rated at 6kW by 2373kWh and 1.19t of C02 on an annual basis.

SLIMLINE SE power supply systems are built from individual modules with capacities of 800W (SLIMLINE 800 SE) and 2000W (SLIMLINE 2000 SE). The SLIMLINE SE rectifier modules are installed in 19" 1U carriers. Each carrier can accommodate up to five 48V- 800 SE modules or three 48V-2000 SE modules.

Systems with different battery capacities and load configurations can be created. Distribution modules are designed to fit 19" racks and are 1U or 3U high depending upon the number of output feeds required. The rectifier carrier, rectifier modules, battery protection devices and output distribution equipment forms a complete modular SLIMLINE SE power supply system (SLIMLINE Modular System ≡ SMS).

The SMS 4000 SE increases the maximum power to 4000W. This system consists of a 1U carrier with up to five rectifier modules (48V-800 SE) plus the battery protection and load distribution unit 4000 SE.

Larger capacities up to 6000W (SMS 6000 SE) are possible using the 48V-2000 SE modules. A 1U 19" carrier can accommodate up to three of these rectifiers and can be combined with the battery protection and load distribution unit 6000 SE.

A capacity of up to 18000W (SMS 18000 SE) can be achieved by connecting in parallel three 6000 SE rectifier carriers. These can then be combined with the 3U 19" battery protection and load distribution unit 18000 SE. Even greater capacities can be realized by the parallel connection of further carriers.

The new 48V rectifier TEBECHOP 13500 SE is ideally suited to power supply systems with a load requirement greater than 50kW.

The 3U high 19" mounting unit has a three-phase mains connection, active power factor correction (power factor 0.99) and supplies a constant output power of 13500W. The output current is 250A at 2.25V /c (float voltage).

The TEBECHOP 13500 SE is very energy efficient particularly within the 25% to 90% load range . For larger capacity systems proportionately more energy can be saved when using this rectifier series. Higher energy efficiency results in reduced heat output. In most cases this leads to a reduced demand for cooling or ventilation, saving even more energy.

The compact installation height (3U) of the TEBECHOP 13500 SE together with the low power loss and improved efficiency allows up to 10 rectifier modules to be installed in a single cabinet 2000mm high x 600mm wide x 600mm deep. To complete the system, battery protection and load distribution cabinets are available. These cabinets can also accommodate assemblies such as the MCU2500.

With this experience BENNING will be one of the best partner for the design and the roll-out of a wide range of outdoor power solution projects.